The Island of Sicily 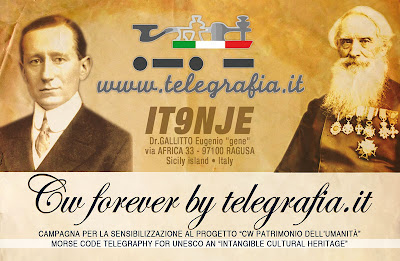 I've worked Italy many times but this morning was my first contact with the Island of Sicily. Gene (IT9NJE) was sending CQ "out in the open" and was an easy catch.

I remember bits and pieces of this island from my days in the Navy. We damaged the propellers on our ship while attempting to moor to a buoy in the nearby harbor of Malta and we spent a month in dry dock at Naples trying to resolve the problem. Several times we tested the ships new propellers on a run between Naples and Sicily.

I vividly remember this scene of the volcano Mount Etna in Sicily as well as Mount Vesuvius. Volcanoes are very dangerous things. Mt Etna erupted as recently as last year and spewed ashes hundreds of miles. Depending on which way the wind, or the "jet stream" is moving, this debris can be carried all over the world.  Today is my 20th contact into Italy and my 44th daily DX contact with 3 watts of power and a random wire antenna.

Good morning John, very nice contact into the island. When you mentioned the volcano it brought back memories of MT ST Helen when it let go. Even here in Toronto we were affected by the ash.
Have a good weekend
Mike

It's difficult to imagine how much energy (and ash) is released when these big guys erupt and blow ashes all over the world. I have trouble comprehending all that energy.

Scary how many are still very active in the world and the potential for catastrophe. Sometimes I think we're all living on borrowed time. I hope Mount St Helen is done for awhile and in the sleep mode. Once in a lifetime is enough...