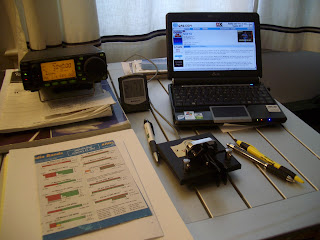 I hit the jackpot this morning on 15 meters with 5 DX stations. Two of them were new countries for me. I used the 15 meter dipole again stretched out inside the upstairs rooms. Today I moved it to the same location as the 10 meter end fed wire. There's hardly any space to spare but I was able to use it by adding another 10 feet of coax to feed the center point of the dipole. 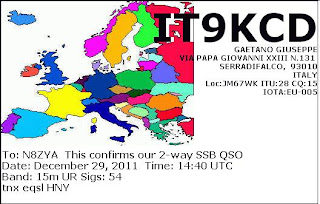 My first contact was IT9KCD in Italy (SSB) followed almost immediately by GW0TAU (CW)  in Whales. I've worked both these countries but soon afterwards I worked my first contact in Switzerland (HB9AOF) SSB. About 10 minutes later I heard a VERY strong French station (F5IN). He was so strong that I immediately dropped my power to around 3 watts. I actually sent my power to him as 4 watts during the contact but the meter on the rig was much less than 4....regardless, this makes my 15th "1000 MPW" contact. 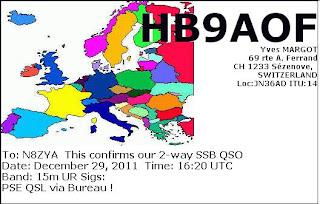 My other new country was 5Q4B in Denmark.

I'm ecstatic about all these contacts. Switzerland and Denmark and another French "1000 MPW" station. It was a very good day for me.

I heard (but couldn't work) TK5EP in Corsica, CT1EHI in Portugal, RW2A in Russia, LX1DA in Luxembourger, EU7A in Belrus, and another station in Austria (couldn't find the call sign). 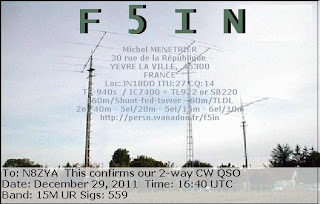