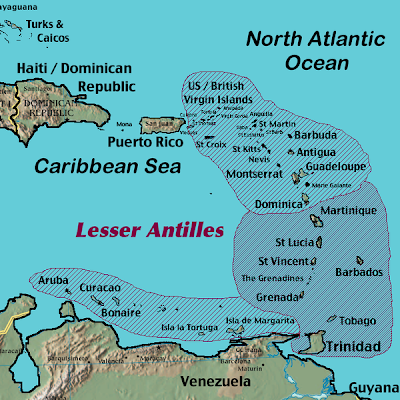 I worked another new DX entity this evening. Frantz (FG5FR) was on the island of Guadeloupe. This country is now # 56 in my list towards the DXCC award. I've worked several of these islands lately and this is one of the areas where I have the possibility of adding to my growing list of new countries.

I found this station on the 17 meter band, and I continually watch for new possibilities on the DX cluster every evening. Other than the Canary Islands, I've worked nothing in Africa. I've worked most of Eastern Europe as far as Bulgaria. I still need Estonia and Iceland, but other than these, the pickings are going to be slim.

I've heard Alaska and Hawaii the last few weeks also; but too weak to work. Those are the only states I need for WAS. With the addition of the random wire antenna, I think there's a good possibility catching them. Strange as it may sound, I'm looking forward to the winter months when the longer nights should work well for radio.

Look for Alaska and Hawaii during the Sweepstakes in November. Both entities (states) are usually well represented.

Will do....and thanks for the info. I need them both.

Good evening John, great to hear you were able to get some DX. I have heard the conditions are not that great around now as the atmospheric conditions are not so great. I do agree about the winter months and the more DX is invites. I have to get rocking on my Jubilee DXCC's.

This evening there was not much on the bands but I managed to work a Florida station and another in Habanna, Cuba. I'm looking forward to the winter months now.

btw/ there is a possibility of snow flurries in the mountains tonight.