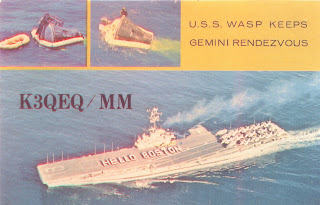 Last week, when I worked K3QEQ, we started an e-mail exchange, which allowed us to share a few "Sea Stories". They've been about our time serving as a Radioman and a Signalman back in the mid 60's. I was on the Navy Destroyer USS Corry (DD-817).

Bill was a radioman aboard the USS Wasp (CV-18) when they picked up the Gemini IV Space Capsule. (and the 6th, 7th and 9th). Can you imagine the "pile ups" for this "rare DX ?" The dipole was in the crossarms 160 ft off the water.

I got his card today and found it SO interesting, I decided to put in on the blog. He also included a picture of himself in the "radio room" using "Collins" gear. That same kind of radio is still being used today and they STILL work. (I believe better than the NEW radio's of today). I don't think anyone has ever developed a better set of "filters". 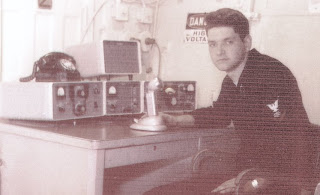 We were always friendly with the "radio guys" but found differences in the way we interpreted Morse Code. "Seeing" and "hearing" Morse Code are two different things. I could never transfer the "speed" back and forth.

The brain processes that information differently, and we often amazed each other when we tried to decipher Morse Code in a different mode. On a "searchlight" Morse Code starts to "blur" together at about 10-12 wpm. (You can't distinguish the "dot's" from the "dashes"). When I was active in the Navy, there wasn't anyone in the fleet I couldn't follow with my "eyes". 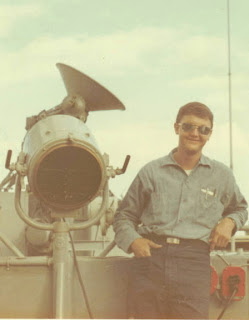 I've known radiomen that could "hear" code at 45-50 wpm. At this speed, (and still today) that sounds like a swarm of bee's to me. I've never been able to hear it correctly. It took me awhile to change from my "eyes" to my "ears" when I was first licenced as a ham radio operator. I often wonder if I will EVER be able to read "fast" code.

Due to today's "Digital Age", the Navy quit using "code" several years ago. (at least that's what I'm told). But I can't imagine the "art" becoming forgotten and obsolete.

We were able to send and receive "code" at 10 miles distance with a simple light on a clear night. We could also send and receive Semaphore at two miles. (We had a pair of "eyes" that could see the "tip of a mast" barely sticking above the water line on the horizon). And I still remember the "filters" we used for flight operations at night.

I'd be interested to know if the "old" skills are still being taught in today's Navy? You never know when "the most basic of all modes" might be needed again?

I can't imagine using those "shutters" to communicate now , but I bet 100 years from now, it would be really nice see them again , if the satellite "fizzled" out.

I've really enjoyed this e-mail exchange with Bill (K3QEQ) and look forward to hearing him on the air again. Of course, we're both a little older now, but once the "salt" is in you, you never forget it.