The annual Kanawha Amateur Radio Club Hamfest will be coming up in a few weeks and on March 16th, I will display my QRP station there with the hopes of introducing hams living in this area to my aspect of the hobby. My goal is to bring attention to "low power portable radio". Last night on the local repeater, I made my second announcement about my accomplishments with QRP power and Morse Code.

I was not "radio active" until I retired from the Sherwin Williams Paint Company in 2004. Before retirement, I used a MFJ 9040 QRP rig from a three story apartment building by running my 40 meter Isotron antenna up on a painters pole which was bungee corded to the outside third floor stair railing. 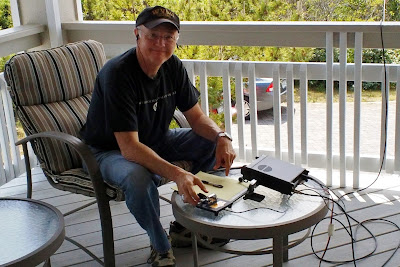 About 6 months ago I started using an indoor random wire for an antenna, which has allowed me to work the 30 meter, 17 meter, and 12 meter bands from inside the house. From my home with the indoor random wire, I've now worked 96 DX stations on the 17 meter band, in the last six months, with 3 watts  of power.

At the hamfest, I'll have the keys I use and a small computer for displaying my QSL cards and I hope to string up a new 17 meter dipole. I'll attempt to work stations in Eastern Europe from there from 1300-1800 GMT, and if I'm successful with a few of them, afterwards I will tune to the 18.096 QRP frequency and begin calling CQ.

I've had a blast working QRP.  I have 1,830 stations in my log book now and I've worked 361 DX stations in 73 different countries. I don't work contests because I simply don't have the radio for them.

This morning I worked V31AC in Belize for the second time and a new station (F9IE) in France. 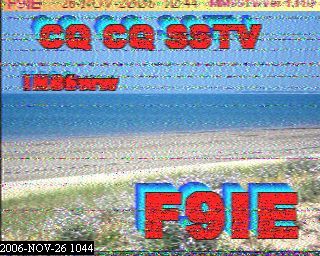 This morning makes my 56th day of working at least one DX stations every day I'm on the air!

Well good morning John, very nice to read that a lot of the DX was worked with an indoor antenna! I am sure as this story comes out at the ham fest you are going too you will for sure have some shocked looks!
Have a great week and good DXing.
Mike

I hope so. It's no big deal using QRO and using big beams; but with 3 watts and an indoor random wire for an antenna, I think I've done pretty well. But despite that, the important thing is to demonstrate the fun of a very simple station.

BTW/ You would make a very good ambassador for the QRP community also! I sometimes forget you're operating stealth there in Canada. Hihi. Can you make it to Charleston on the 16th ??

Congratulations, John. You have certainly showed those who say it can't be done!

You're a very good example yourself, and one of the first blogs I stumbled upon when thinking about stealth radio and antennas. I've developed the same philosophy when it comes to not cluttering up the neighborhood views.

You've been an inspiration to me for many years.

Great to read about you. I love my QRP ops. My time is limited so mk y log is small. I work contests on the hunt and pounce practice. Best of luck to you and hope to work you on the bands. Chuck, aa0na

QRP is my only mode, I've done it a little over 20 years and never tire of it. I hope to do it another 20 years. Good luck in your adventures! 72's

Congratulations for your excellent work. It is Hams like you who deserve all of my apretation and respect.
Keep doing it and showing everybody what "do more with less" means.

After many years away from contests, this year I participated -only a few hours- in the ARRL DX CW (single op QRP) and managed to log abt 250 W/VE stations using a vertical ant.

Thanks for the kind words and I'll do my best with less for as long as possible.

"You see, wire telegraph is a kind of a very, very long cat. You pull his tail in New York and his head is meowing in Los Angeles. Do you understand this? And radio operates exactly the same way: you send signals here, they receive them there. The only difference is that there is no cat."

Great Quote and glad to see you're using it on that side of the pond.

Hello John, thanks for this informative article. It's great to read about your achievements with the indoor ant's and QRP.
Good luck and have fun on the Hamfest. 73, Bert

I'm looking forward to the hamfest this year. It will be even better if I can jump across the pond with a simple dipole. Hope to open a few eyes up there. hihi