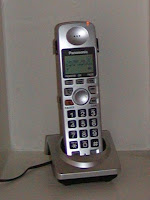 I usually don't spend a lot of time on the 80 meter band, but last night I had a delightful conversation on the FISTS frequency. I had been (I know this sounds insane) calling CQ at 1 watt with the hopes of nabbing a QRPp station. Here in the city, with the power line noise, (on 80 meters) that usually means a station at about 150 miles.
And then I heard N2ESE in New Jersey (400 miles) call out.... but another station got to him before I could crank up a few more (5) watts and return his call. As Gary talked with the other station, I realized the conversation was revolving around a "new" FISTS award for contacting 100 other stations with different AREA CODE phone numbers. (it's listed in this months "keynote magazine")
Since I made over a hundred contacts last year...... this is an option for me!
When Gary (N2ESE) finished the QSO, I sent N2? and few times (I really didn't think he would hear me) and surprisingly, he returned my call!
Gary is a GOOD operator....I think probably one of the best I've ever heard on the bands. And he immediately commented on the Isotron Antenna's and our previous CW QSO's on the 4o meter band. (We've talked 3 times now). Our conversation carried on for well over half and hour and it was pleasant, motivating, and encouraging to realize he was looking at either his "log book notes" or my BIO on QRZ while sending CW. (I'm not there yet)
I just can't say enough good about this guy!
Every conversation we've had, has been on the FISTS frequencies, and every conversation has been about the club....and yes....we exchanged "AREA CODE" phone numbers.
I've never met a more professional CW operator on the air!
His "fist" is extraordinary, his choice of words and abbreviations are exemplary, his spacing is perfect, and his CW speed always matches the other operator. What else could anyone ever expect of a quality CW operator?
After our QSO, I listened as he continued on with a few other stations (one of which was in the 25-30 wpm range). It was nice to work him again and I always look forward to hearing him on the air.
I'll be exchanging "area codes" with other operators now!