Rainbow Trout on the Grill 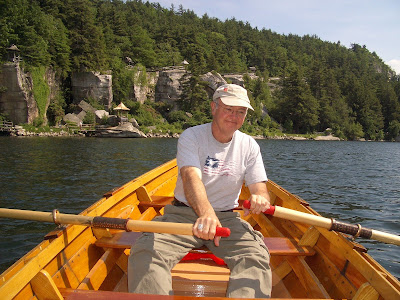 Bright and early again this morning, fishing in the same stream, at about the same time, I pulled a trophy Rainbow Trout out of the same pool!

I'm just ecstatic about working (W7GVE) , on the same frequency (actually 7058.02) this morning!! I wasn't hearing a thing on the band (normally a very bad sign) but in the distance I hear another #7 call. (1400z--1425z) Ed lives Golden Valley, Arizona near the California border and about 1,814 miles from me.
He was working another station (which I could barely tell was there) and on about the "third" exchange I heard his call sign very distinctly. WOW....second day in a row and THIS time...., loud enough to try another QSO!
I think he could hear me a little better than I could hear him but (although he was QSO'ing at least 15 wpm with the other station) he immediately QRS'd to about 5 WPM.
And this was a key factor in making the contact this morning!
QSB was still a factor, which at times, was very difficult to overcome.
This morning, we exchanged Name, QTH, RST, FISTS #, and "Area Code". He knew my name (I think he reads blogs).....hihi. He remembered yesterdays exchange and commented on the antenna and being QRP in West Virginia.
This was still a difficult contact (at least for me) but a "valid" one for "club" purposes.....
I sent a "note" in the mail yesterday, but this morning I'll send a REAL card!
I got a nice "e-mail" (right after this QSO) from a ham in Wisconsin. (W9GOC).
He was startled by my QRP signal...

"Your CQ was coming though nicely on 7.058 this morning - - certainly a 599
report. I'm afraid I didn't record the exact time - - I was just
passing the shack while dealing with the preparations to dash off to the office
- - but I'd estimate the time as ~7:20 local, which should be ~13:20 UTC
29Jan2009. I realize this is not quite as rewarding as a genuine
QSO, but at least you know your signal is getting as far as Wisconsin!
:-)"

I wonder if he likes Rainbow Trout?
I know yesterdays post mentioned me leaving for a long trip and I would probably not be posting for awhile ....but this mornings QSO was something to crow about!
I should be posting again around the first of March.....(really)
I'm on a real high right now and enjoying the fish!