I've been in New York again (for a few weeks), to visit friends and relatives, during the Christmas Season. But I didn't take the radio with me because of time restrictions....
The first thing I did (when I sat down for a few minutes) was to total my "log book" and look over the past year. (The previous entry was a summation of my 2008 radio events etc).
My "first" contact in 2009 was K0LUW (2245z) on the 7055 SKCC frequency. Russ was in Omaha, Nebraska. (825 miles from me) We both heard each other at about the same level (569) but when he returned my call.....QRM ate him alive.
Come to find out....as I was sending my stats, other stations (that couldn't hear me) assumed the frequency was open and started their CQ's. This made for a very difficult contact......
Russ realized the situation and kicked in his Heathkit amp (which boosted his signal significantly)He was now pushing 600 watts into a "Vertical Dipole" (an antenna I rarely hear on the air). The frequency immediately became tolerable again. 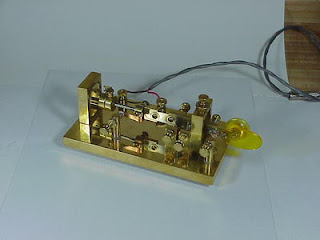