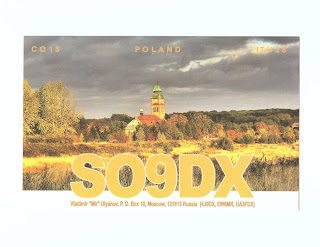 This weekend, I worked a few stations in the North American QSO Contest, and was pleasantly surprised to see them listed on the E-QSL site, when I logged on last night. I don't use them often but...really don't understand why more Hams don't take advantage of this service!

Especially DX Contacts!
The last DX card (I exchanged) cost me nearly $5.00 to get to Moscow Russia and back so the "E-QSL" site is a GOOD idea to reduce postage costs.
My station (actually in Poland) made the "distinct statement" on his QRZ site: "Don't Send US dollars, My Postman Loves Them". (That's something to think about the next time you "slam" the US Postal Service, but I think, common in a lot of the world) That's the reason I needed to send the card to a manager in Moscow before it could be confirmed and returned to me from Poland.
In addition to the two envelopes, US postage stamps, and 2 IRC coupons. (Oh...did I say it took 3 months to recieve them?)...it was VERY close to 5 bucks a card!
An E-QSL card (yes...printed on a NICE postcard) would have cost me a buck! It's pretty much a NO brainer for me.
I'm not a big collector of "cards"....but there are times when they're memorial ("Special Event Stations" and a nice long "QRP" contact). But why not leave the option open for E-QSL cards?
I'm just as happy with a nice e-mail (with a picture attached) so
I think, especially for DX contacts, they're worth some serious thought!