I wasn’t able to make a single contact with the NAQCC contest this weekend. Of course, all the participants were running QRP (5 watts or less), which make it a little tuff, but, in the past, I’ve worked several QRP stations at 1000 miles.

The problem was a horrendous noise level at my QTH…. It was so bad I couldn’t hear a thing on 40 meters (where I make most of those contacts) and my antenna doesn’t function well on 80 meters.

I could hear many stations on 80 meters, but I don’t have extra filtering on my rig.
I was hearing the sound of a “bee hive” and that was about it.

The bands have been just horrible the last few days but I’ve managed to work at least a station a day this month (and there have been several days I’ve not been on the air). I'm having fun tho....and that's all that matters!
Fox Hunting season (on 40 meters) is about to open and I'll be looking forward to tanning a few hides! This month I’ve worked stations in MO, NY (2), NJ, TN, IN, IL (2), NC, and IA.

Today, I mailed out an envelope of QSL cards for FISTS members.
One of the stations (KB9VTM) had a nice picture of his shack on the web: 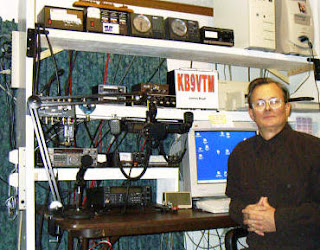 It was also a joy to work K2GTC (again) in New York City last week. I’ve worked him before and I travel to the “big city” several times a year. Most Hams are familiar with “Google Earth” program. I use it for hiking sometimes and, just out of curiosity, I looked up his QTH .
I’ve walked right by his place several times. The last time I was there, I recognized his apartment building from the "Google Earth" program. I’m not sure, but I thought I saw his "random wire" , blowing in the wind, from the 6th floor window.

You don’t hear many Hams in this neck of the woods!
Posted by Jspiker at 11:56 AM