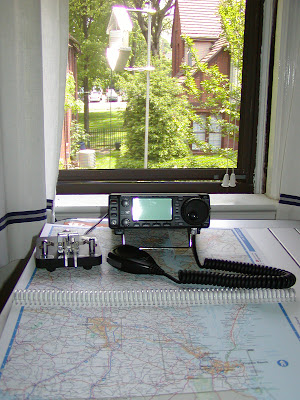 I bought this little Rig when I retired and haven't had the time to play with it. As a matter of fact, I still don't know how to use all the buttons. But I know enough about it, to use the basics, and decided to try my luck again last night.
I've been frustrated with the antenna that came with it and decided to experiment with a special antenna called an Isotron. I've used it before and knew it would perform if "push came to shove".
The 40 meter band was horrible last night but my first contact was a 5 watt station about 100 miles below Richmond VA. The noise level was almost an S-7 but I was able to work him. This is about 400 miles away from my location in Charleston.
My next contact was on the border of Canada near the tip of Michigan. As a matter of fact, the town has the same name on both sides of the toll bridge leaving the United States. Sault Saint Marie is about 600 miles in a straight line from here.
Just as I was about to shut down, I heard a "0" call from the Midwest. My signal report was a RST of "489". For you "non radio folks"- that's pretty darn good considering Minot,North Dakota is 1200 miles from me.
Needless to say....I'm a happy camper.
I will be able to operate this rig with a simple battery pack and hike with it to a better location. Away from all these "city power lines" that are SO interfering!
My frustration began while listening to a corporate jet at 35,000 ft, talking to two fellows in England last week. I knocked myself out trying to get thier attention with the "portable whip".The next time I'll be ready to snare them and get those famous QSL cards confirming the contact.
My most prized QSL card so far,has been from the Russian (MIR) Space Station. I worked them from a cow pasture, "Sitting Around the Campfire", as they crossed the early evening sky, with a walkie talkie, and a 30 watt amplifier.
Posted by Jspiker at 7:57 AM