I keep making my daily DX contacts as the month rolls along (33 now) and surprise even myself when I work "familiar" signals on the 17 meter band. The last several days I've worked the YN9SU station in Nicaragua despite very weak reception on my part and I'm amazed when he responds to my call. He is mostly "barely" above the noise level. I think it must be the orientation of his antenna.

This morning I worked a new French station (F6CYP)  which was just barely above the noise level.

I also had a VERY interesting QSO with a station in London.

A few years ago, my wife and I traveled from the tip of Scotland, to the south of the United Kingdom and to London. We spent several days there, so were able to mingle and merge with people. 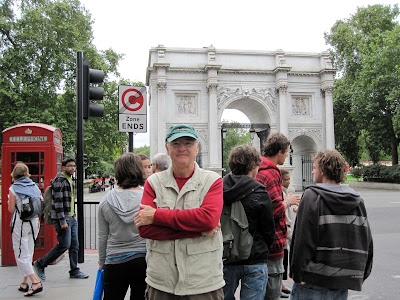 This morning while working the London station, I recognized the "FIST" of the operator but "NOT" the call sign, and the London operator remembered "me" from my contact with him on the previous day.

I'll be the first to admit  one "dit" is easy to miss in a call sign, and yes, myself, and many others, have done the same; but the London station and I talked at length about our previous conversation from yesterday morning. (I'll get to the dit in a moment)

This was a nice QSO about our rigs, antennas, the 50 mph gusts of wind, in both our countries, and his 50 watts into a Yagi verses my 3 watts and an indoor random wire. The only difference in our weather seemed to be that he was experiencing our "yesterday summer time" temperatures and we now have snow this morning.

I worked G3VBS this morning, and he was was using the same "straight key" as yesterday, I've no doubt this is the same person I worked as G4VSB yesterday morning. The time and frequency was about the same. His choice of words, fist, and spacing was exactly the same. I thought......

Perhaps I missed the "dit":

But here is where it gets confusing to me.

This mornings signal was much better than yesterdays, and I think he was transmitting from the same location with a different radio. Why? 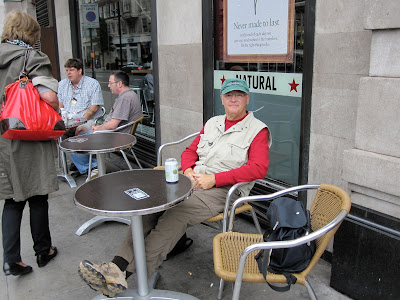 While we were in London, I distinctly remember "Hyde Park". We took the city bus from near the BBC headquarters and got off on Cromwell Street and walked into Hyde Park, through it, and had lunch while we were there. The missing (or additional) "dit" becomes meaningful here.

If you "google" G3VSB and also G4VSB, you will get the same location!

It's just a few blocks from Hyde Park but in the same "area" of the "two" different stations. I remember this area very well since the bus passed right past it.

There's no e-mail addresses for either of these stations, so I'm unable to get an exact solution to this curious puzzle. I'm hoping someone in this part of London, near Hyde Park, might read this and find out for me.

If so, please let me know because it's really bugging me. I can't figure it out. Without the distinctive "Straight Key" aspect, I'd write if off as a missing dit, but I'm not so sure now.

Nice story John. It's just like a investigation. May be you made a contact with an old MI5 spy. 2 different callsigns almost same location, no e-mail addresses. Sounds if the person behind it doesn't want to be found. Ah, we nee Sherlock Holmes ;-) 73, Bas

By the way John, I typed all the 3 different calls in at QRZCQ and get 3 different locations! 73, Bas

Use the QRZ.com Satellite View and zoom in on G3VBS and G4VBS. They're practically beside each other about a block over from Hyde Park. The address's are different but the locations are very similar, if not the same.

Sherlock Holmes could figure it out. I love his stories and have all of them downloaded on my Kindle. hihi

I wonder if he would take the case?

Hello Bas....It's becoming more likely every hour that the station was G3VBS and NOT in London. I missed the "dit" in the previous QSO and the other station choose to not list GPS co-ords; therefore the default is London. hihi

Good morning John, get way to track down a call! Looks like it was a very nice time in London by the pic's. Julie and I spent a week in London last year while in Europe for 6 week on vacation. As for the dits' here is one for you....SH5EI
Mike

I really liked that trip and my roots are there. It's a VERY interesting place to wander around and blend in with the crowd. Great hiking also in the Northern areas.

As for the SH5EI call...if I were a dedicated CW operator, think I'd trade than one in for another call. What a nightmare at high speed!