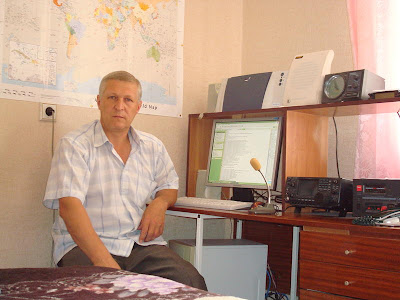 I've noticed the window moving a little forward for about a week now and it's staying open for a shorter period; but this morning I hit the target at 5,819 miles in Russia. I actually worked Victor (RA6XV) on two different frequencies; but the first exchange was "blistering fast" and I was unsure of the correct call sign. Ten minutes later, I found him again, on a little higher frequency, and sending at a speed which I was more comfortable.

Victor was not spotted on the cluster, which is probably the reason I was able to work him. I've found DX clusters to be both and blessing and a curse for QRP operators. I've found my success rate much better without them.

This station is the farthest "west" I've ever worked on the bands. I've worked Russia on 20 meters, 15 meters, and unbelievably, 40 meters; but Victor is on the 44th longitude, between the Black and Caspian Seas and just north of Georgia and Armenia. 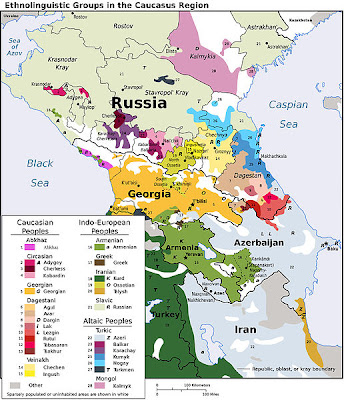 Russia wasn't the only DX station I worked this morning. A few moments earlier I worked TG9ADM  in Guatemala City Guatemala. I've been hearing this Central American station for the last several days. It's South of Belize and in the midst of the Inca culture. I've seen several of these area's in my travels and have a great admiration for Inca building techniques. Despite earthquakes, which are quite regular in these areas, they've built structures that have resisted, for hundred of years, the test of time. 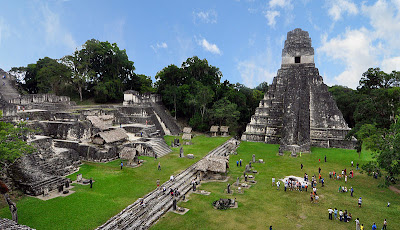 This station is also an New DX Entity for me.

As I noted earlier, the morning window on the 17 meter band seems to be moving up a little and staying open much less. I worked these station a little after 8 am which is about an hour earlier than the beginning of the month. I don't know how much longer it will last.
Posted by Jspiker at 10:35 AM

Hi John. 17 certainly has been fertile ground for you. Congrats! Are you also active on any other bands?

Let me know if you ever pop over to 40 or 30. I've been spending more time there lately working on SKCC awards and would like to add you to the log.

Take care and keep having fun!

I work both those bands but have been spending most of my time chasing DX stations. Of those two; I tend to spend more time on 30 meters but that one is probably too short for us.

Guatemala is a nice one John. I've just read a book about the Maya and the explorers that found the ruins. Very interesting. 73, Bas

Yes, they're a fascinating culture. I've been to South America and seen some of their stone works. I saw an enormous stone once with 13 "precision cuts" that fit close enough together you could hardly put a piece of paper between them.

The people are also incredibly resourceful. It's a way of life I admire. Simplicity....sort of like QRP operators. Hihi