I love working "Special Event Stations" and I found S5121IAPMC in Slovenj Gradec Slovenia this morning on the 17 meter band. It's especially heart warming to realize this station represents the "International Association of Peace Messenger Cities". There are two participating United States cities in this event. One in New Haven Connecticut and another in Cambridge Massachusetts.

Here's a link to their webpage:  IAPMC - International Association of Peace Messenger Cities

I also found several K3Y stations on the bands this morning. These "special event stations" celebrate the "Straight Key Century Club" here in the United States. I've worked several of them the last few days.

This morning I heard F6HKA in France working (and passing out) his SKCC number. Bert sounded like he was "right here in the shack" on both 17 meters and 12 meters.

I also worked SQ2RCM in Poland this morning on 12 meters. (SSB) It was an act of desperation when it appeared the bands were not going to open.

This evening I was able to work ZP6CW in Caacupe Paraguay. This is the second time in a few weeks I've worked this South American station. At 4,678 miles, it's a good catch for me. As before, I worked him on 17 meters and almost the same exact frequency. 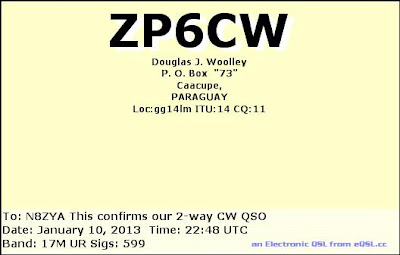 Hi John, you've got a pipe line to Europe, that's for sure. I still hope to catch one day... 73 Paul

I'm always listening; both for you and Dick in France. It's just a matter of time. Sooner or later....

Well sure does sound like a very successful day in radio and that sure is some call sign from S5121IAPMC....WOW!!

I think it definitely falls into the "nightmare" CW category. Nine characters at high speed is a bit intimidating for most folks.