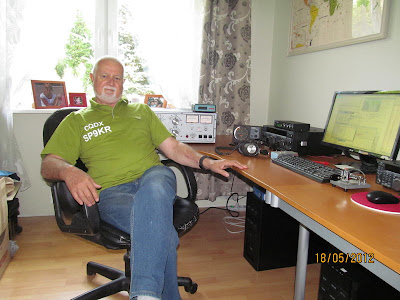 I really needed this contact today because it brings to a close my personal goal of working a DX station, every day, for 30 consecutive days!

If the above picture looks familiar to you, it should, because for the third time this month, I've worked Andy (SP9KR) in Poland. He was VERY strong this morning, and easily worked, again, on 17 meters. I've now worked stations in Poland nine different times on the 17-12-30 and 20 meter bands.

I was really worried about making this last needed contact because I play cards most of the day on Mondays, , and missing this morning contact would have put my goal in serious jeopardy; hence I was very grateful to work Andy so early, and to hear such a great signal. As I've noted before, this station was "in the open" where I have the greatest opportunity for success.

The solar flux index was only 98 this morning, the A index was 6 and moving downward, and the K index had fallen to zero. I've joked many times about my signal bouncing off the "golden dome" of the state capitol building, just up the street, and it makes about as much sense to me as working stations at better than 4,000 miles as anything.  (don't take this seriously) I really have no "logical explanation" for this string of contacts, especially using low power and an indoor random wire.

My best guess is the power of  simple "Morse Code".

Andy wasn't the only station I worked this morning before heading out to play cards. I was also fortunate to work another station in Russia. Although I heard F6HKA in France on the 12 meter band, I decided not to make another attempt to work Bert; I stayed on 17 meters. A mere half hour later I heard two different calls coming from Russia; one of them potentially, with a little patience, and a little luck,  loud enough to work. 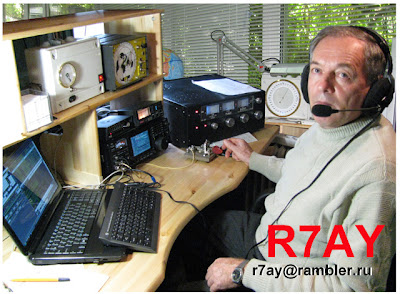 I was hearing RA7T but decided to focus on another Russian station because he was "out in the clear" and not spotted on a cluster. After several attempts on my part, Sergey (R7AY) sent a "question mark" back to me and I knew I might work him.

This turned out to be a difficult contact, and without his patience and perseverance, would never have materialized. I had trouble hearing his call sign correctly, and he had trouble hearing mine, but after several tries we both got it right. Sergy (R7AY) was located in Armavir Russia at 5,667 miles.

I continue to be in awe at these big Russian stations! I've worked different stations there five times now. Remarkably, one of them (RD3A) was on 40 meters . It's just amazing to me, they can hear such a weak signal at these distances; simply astounding.

** I'll continue to make DX contacts as usual now, but now that my immediate goal has been met, I'll probably ease off after the end of the week. It's been fun, but work, and I choose to keep my radio hobby "fun" above all else.

I will, however, continue to look for "new" entities, still out there hiding from me, and just waiting to be worked by a QRP station; I can't help myself when it comes to those; after all, I've been bit by the DX bug, and once bitten, they never let go.

Good morning John and lets start off by offering my congrats on getting 30 DX's station each day for 30 days. As for the QRP CW signal I too have been amazed how far such little power can go. Also the ears as you say at the other end are a big help as well.
Mike

The BIG ears are everything!

I've become acutely aware of the advantages of an effective antenna, verses high power. Matching a good receiver with good filtering is always a winning combination too.

The Russians impress me with their massive antenna systems. I've no doubt they can hear a gnat sneeze in Morroco.

RD3A is the most amazing catch I've made, and yes, it was all on his part!

I actually had a fellow here in the US accuse me of "fabricating" the contact because he didn't see RD3A spotted on a cluster. Hihi I doubt I would have never been able to work him under any other conditions.

Fortunately, and without any prompt, Valary (RD3A) sent me a QSL card for the 40 meter contact. The truly amazing thing about this 40 meter contact was that I caught him with the Isotron Antenna; appropriately labeled "the bird house".

His card is one of my most cherished!