I still continue to make my daily DX contacts but yesterday I enjoyed some "good" short range contacts on both 40 and 30 meters. It's a small world with the local QSO's and when I worked K8EHE in Dublin Ohio, it soon became obvious that he not only knew Charleston well; but had talked to a good friend of mine earlier in the day. On my second contact on the 40 meter "fists" frequency, I talked to a QRP station in Norfolk, Virginia. I was stationed in Norfolk when I was in the Navy. Alan WB6THE was running only 5 watts and above all else, QRP stations are my favorite contacts. Before the evening was over, I caught Larry (W2LJ) on 30 meters.

I thought the prospects for DX were about nil yesterday as Larry (W2LJ) and I talked because the 30 meter band quickly shifted from "into the noise" to "just above the noise". I was surprised this morning when I saw Larry's new "posting" on his blog. He worked another new DX country yesterday which was in the United Arab Emirates; and he did it the "old fashioned way"---he earned it!!

Larry correctly used the term "pandemonium" to describe working this station because the originator was sending "simplex". For those who may not understand the ramifications; it's like a thousand people trying to stick their finger, in the same hole, at the same time, in a leaky dam.


But all was not lost yesterday for me, concerning DX. Before turning in for the night, I again scanned the 30 meters band and easily worked LY5O in Lithuania, OM3PA in the Slovak Republic, and ES3AX in Estonia and this morning I worked a familiar FG8NY in Guatemala. I've always said radio is a lot like fishing since you never know what you're going to catch until you throw your line in the water. The surprise is what makes the sport so much fun.

I enjoyed the "rag-chews" yesterday and plan to do more of the same, more often now. Today marks my 107th daily DX contact.


Here's a card I received in less than an hour from the folks at E-QSL
Postage Free !! 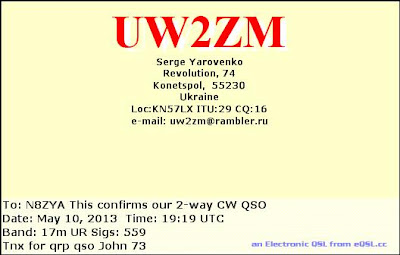 That's great John. I love the QRP<>QRP QSOs as well. I read Larry's post earlier today and was very impressed.

I am not big on tackling pile ups so when you say he was operating simplex do you mean that he was tx and rx on the same frequency? I have never operated split so I probably wouldn't bother trying. How do you know if they are simplex or split?

Yes, When you hear the term "simplex" they're on the same frequency for both transmit and receive. "Split" means they're using two different VFO's. One for transmit and another for receive.

Working simplex can be very difficult as sometimes "he who has the most power, gets the most attention". When you're operating QRP, you learn to listen the "pattern" very closely. You can hear the "group" bunched up, usually 1 KC above the transmit frequency but sometimes, they're even higher.

Most DX'er usually are very "protective" with the transmit frequency. Someone will let you know quickly if you're using the wrong frequency. The DX "police" (just kidding) will send "up" or "down" or QSY to let the offender know he's covering up the call sign with his signal. Hihi

It's not done to be "mean" it's done out of necessity. Hihi