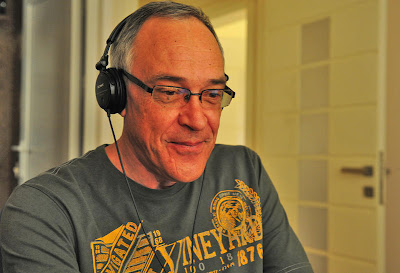 For those who read my blog regularly, this picture of Chris (A45XR) should be recognizable. Yesterday afternoon, I heard this station from Oman on the 17 meter band and I was able to work him, for the second time, in a short few months. He pumps a fantastic signal into West Virginia.

My first contact with him was in February and on the 30 meter band. At that time, he was NOT spotted on a cluster. This time I wasn't so lucky and there was quite a pile up. He was working a LOT of stations and it took a little time for me to find his listening frequency.

I didn't think I had a frogs chance of working him under theses conditions, but I couldn't resist the temptation to throw out my call. After about a dozen times, I was about to give up when I decided to "match" his sending speed of around 25 wpm. which, under most conditions, is a bit too quick for me. 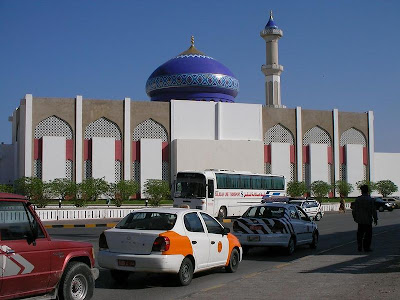 Bingo...I heard him respond with N8 ? and again, N8 only, and again. I have no idea if he remembered my call from before (I sincerely doubt it); but he was persistent in getting it correctly, especially more so, when I couldn't resist throwing in the / QRP 3W.

The entire band got "quite" then and he made sure he had me. He was very persistent in sending Congrats N8ZYA QRP at 3W. 559 John.

I was much too tired to make this entry yesterday after a bad nights sleep but I was ecstatic about this second contact. Oman is 7,428 miles from me in a straight line. He's on the southern tip of Saudi Arabia, beside the United Arab Emirates, and on the opposite side of sea across from Iran. A good catch indeed !! 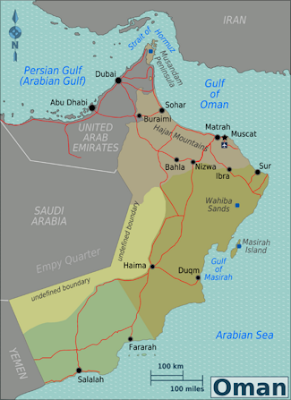 I should know something from the VA in a few days as it takes that long for someone to read the MRI test results.  It was a long drive, down and back, in the rain, but certainty worth the effort. I hope to know something soon.
Posted by Jspiker at 2:56 PM

Good evening John, great work with the contact and I find the same if you match their speed you have a beter chance. For the times when the speed becomes crazy I have MRP40 on my PC for decoding. It works great and is free to try. Hope you hear the results from the MRI A.S.A.P.
Mke

I've heard a few of those "crazy" speeders too and wonder if they can actually copy without a "reader".

Sometimes I feel like it would be nice to have something like that but the little PC I use for spotting is already "maxed" out. I need to run a clean up just about every time I'm on the air. I actually deleted the entire Microsoft Works program just to get it to function properly. There's not much "RAM" on it. hihi

My doctor actually called this afternoon but I was asleep and when I returned the call, he had left for the day. I'll call him in the morning for the results.

I'm hoping for some news---good or bad.

Hi John, a nice catch. I love this kind of stations from that region. 73 Paul

Me too. I've been hearing Japan, and Israel occasionally but the conditions have to be just right. I'm watching the propagation closely and hope to work them sometime.