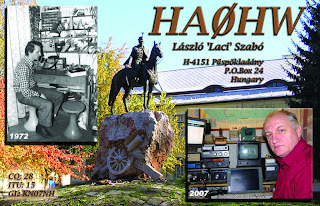 My string of DX continues (110 plus now) despite times when the solar forecast is poor, or very poor, or even "radio blackouts expected". The 30 meter forecast for today is "poor" and "radio blackouts expected"; but early this morning, I easily worked a new station  (HA0HW) in Hungary. This new contact into Hungary marks my 16th contact into their country.

I've learned a few things since the beginning of the year. The biggest is that it's quite "easy" to jump across the pond when using 3 watts of power and a very modest "indoor random wire" and also; the "magic ingredient" in this delicious recipe is the fine tasting morsel called "Morse Code".

Morse Code, by the way, was NOT invented by Samuel Morse, it was invented by Alfred Vail : and after all these years, it's still the  most simple and effective mode of communication decipherable with only the human ear.


Vail left the telegraph industry in 1848 because he believed that the managers of Morse's lines did not fully value his contributions. His last assignment, superintendent of the Washington and New Orleans Telegraph Company, paid him only $900 a year, leading Vail to write to Morse, "I have made up my mind to leave the Telegraph to take care of itself, since it cannot take care of me. I shall, in a few months, leave Washington for New Jersey, ... and bid adieu to the subject of the Telegraph for some more profitable business."[2]

I've now worked a total of 520 DX stations and I think this statistic lays to rest the illusion that "life is too short for QRP". Even after 20 plus years of operating, I'm still amazed at that attitude.

DX does have it's shortcomings. The biggest is that the vast majority of contacts are no more than 599 TU and they're over in a "few brief seconds". But, on the good side, I find the concentration that's required to copy a call sign correctly, at much higher speeds than normal, has improved my daily QSO experience.

I've worked several operators recently that send comfortably at 20 wpm and have been able to copy and communicate with them. I would never have been able to do that; without challenging myself with those high speed DX calls.

Believe it or not, they're many operators on the airwaves capable of the 25-30 wpm conversations. I worked a guy recently in Chicago, that is capable of such speeds. We chatted at a slow 17 wpm and we talked for a long time about our youthful days in the Navy. Conversations like this reinforce my belief that a good CW conversation is much enjoyable more that a DX contact.

I was feeling really good and thought I had reached a nice "high" when I heard something I've never heard in my 20 years on the air;

Bill (W9ZN) uses an old "commercial" CW operators "warm up exercise" called "Ben's Best Bent Wire". It took a little research, to run it down, but I found it incredibly amusing. Just when I think I've "heard it all"--- there's something new that surprises me.

Bill sent high speed CW communications to the Atlantic Fleet in his younger days. I enjoyed this conversation more than working a dozen of those quick "599" DX Stations but I can see the value of always pushing yourself to increase your CW speed. Soon after working Bill (W9ZN), and hearing the "drill" he jumped to "light speed". I was able to follow the QSO with another ham but would never been able to carry on a conversation at 30 wpm.

But there's hope.....and DX is a valuable tool in working towards that 30 wpm goal.