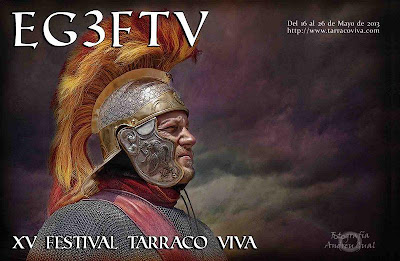 Last night was another one of those sleepless nights due to back pain. I was up several times trying to get comfortable, so moved into the radio room to get my mind focused on a different path. As I've mentioned several times earlier, one of the great things about using the CW mode, is that you don't disturb anyone in the house when you put on the headphones. You can DX your heart out and still maintain quietness in the house. My wife, the dog, and two cats all appreciate this aspect of the hobby very much!

I worked two different stations in Spain (EA7AIN and EG3FTV) in hours between 1 am and 3 am this morning. The "EG" station had a different "prefix" from those I've usually worked in Spain. The city of Tarragona was a large and significant one during the heights of the Roman empire.

Speaking of Spain, I find this Mountain Bike, "downhill obstacle sprint" just spectacular.There's a large "antenna farm" at the beginning of this video too. I hope you like it.

I also heard two "really nice" stations but unfortunately couldn't work them. I've been trying to work Hawaii for years and heard a very strong KH6AT. I also heard, but couldn't work 5W1SA in Samoa, in the seas near New Zealand.

I caught a few hours sleep afterwards but woke up again around sunrise. I was able to work HK1MW in Columbia, South America and also XE3ARV in Mexico near Belize. I've worked both of them previously. 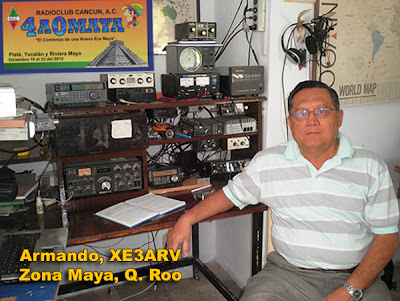 All things considered, my back is actually improving a bit and I'm able to walk around for a very short distance of a  few yards. Unfortunately, the pain returns slowly, and lingers around afterwards for hours. I deliberately push myself. I think I pushed myself too hard yesterday; and paid the consequences for doing so  last night.

I'll have a second MRI procedure done around the middle of next week. This time, to take a better look at the Sciatic nerve in my right leg. On this MRI scan, a dye will be added which will make the nerve and it's passage around a protruding disc, much more visible. I should know my "options" after this test, and make a decision on surgery.

I had another great QSO with my breakfast friend (AC8LJ) yesterday evening. I really enjoy those long QSO's. I also worked a station in New York City but it was a very brief contact because the band was in terrible shape at the time. I've worked K2GTC several times in the past, and always "chuckle" when I talk to him. He lives in an apartment building near the Hudson River and the Lincoln Arts Center. His antenna is a "long wire" hung down the side of the building from his 6th floor apartment window.

I'm always impressed by those who work around "poor operating locations". I know all about those challenges and get great satisfaction when I see it in others.
Posted by Jspiker at 7:04 AM