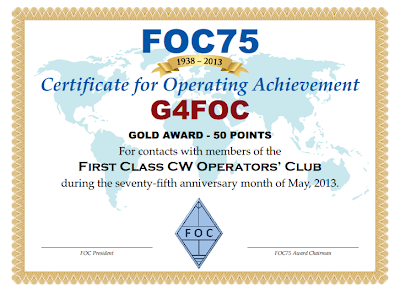 I worked several stations last night but found this one to be especially interesting. This year is the 75th Anniversary of the "First Class CW Operators Club". I found N8FOC working a lot of stations on the 30 meter band and since he was practically right beside me in, Wooster Ohio, he was an easy catch.

This is a prestigious club of CW operators who can send and receive Morse Code comfortably at a minimum of 25 wpm. To be a member, one needs to be nominated by current members, and, of course, to have that happen means you've had a 25 wpm QSO with at least two of their members. Although I can catch a repetitive call sign at this speed, it's quite another thing to actually carry on a QSO. I'm definitely not there yet. hihi

Other stations in the log book last night were EA8URL/P in the Canary Islands. I'm not sure what he was using for a transmitter, receiver, and antenna but I do know that he was "portable". I've worked a station previously who was actually QRP from a vacation resort in this area.

I heard and worked HA1AD in Hungary; who always has an incredible signal into North America. I've worked him before. I've sent another E-QSL card and am sure he will return it in a few days. 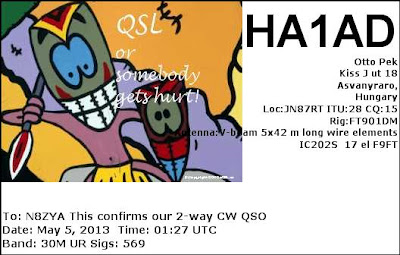 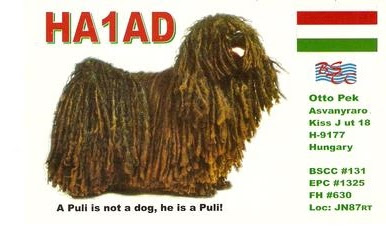 I also worked my first "UU" station with UU0JM from the city of Kerch in the Ukraine. This is an interesting area situated between the Black Sea and the Sea of Azon. It's on the upper Northern portion of the Black Sea and North of Turkey. It has a fascinating geological history, as well as significance in World War 2.

I find the possibility of catastrophic flooding here a real possibility. History is full of event's like this and there is significant archaeological evidence to support it.