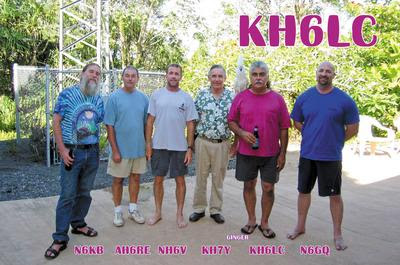 I pushed myself a little too much yesterday, and the resulting back pain caused me to loose some sleep last night. As usual under these circumstances, I limped into the radio room with the hopes of hearing a new station; as it usually takes me an hour or so to get back to sleep.

When I turned on the radio, the 20 meter band was surprisingly active, and I soon heard a strong KH6LC station in Hawaii. He was working a lot of stations but I was not hearing many of them. After a few minutes, I took my "best guess" as to where he was listening. I was able to easily work him on the third attempt.

The longer I'm in this hobby, the more I'm surprised by propagation forecasts. The predictions were "very poor"  last night. This morning the prediction is still "poor" with the A index at "20". Hawaii is 4,504 miles from me in a straight line.

I need only Alaska for my "worked all states" award now; with the elusive state of Hawaii in the log book.

For those not familiar with the antenna that I use for the 20 meter band; it's the one on the "lower right" side. The picture below is my Isotron 40-80-20 combination. It's fed with a single piece of 10 ft coax cable. 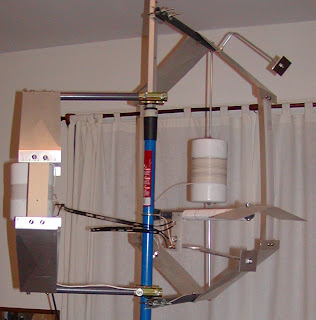 The 20 meter antenna is only around 18" long and it's about the length of a roll of paper towels. It's mounted horizontally and there's a "hat" on the end of the rod. The smaller "rod" below it is the counterpoise. Despite it's small size, and being mounted indoors on a "painters pole", I've worked a lot of DX with this antenna. To be as small as it is, it's done a good job for me. It's still my "main antenna" for the 20 meter DX band.

I got a bad report from my last MRI scan a few days ago. The disc which is pressing the "sciatic nerve" is actually protruding into the "neural" passageway. I need another test to determine whether the nerve has actually been damaged.

Sometimes life can deal a person a bad hand of cards. I'm beginning to think this is one of those moments. It will be another three weeks before the next test.

But on the positive side, I'm making some nice contacts in those early morning hours. I'm looking for that last state of Alaska for my "worked all states" award.

I'll be putting those sleepless nights to good use.
Posted by Jspiker at 9:29 AM

Feel better and stay positive. How does the 40 meter antenna work for you in doors?

Have a nice weekend!
Jim

It's difficult but I'm an optimist. With me the glass is always half full.

The 40 meter Isotron performs pretty well also. I've worked most of the US with it. My best DX on 40 meters is RD3A from Moscow. Considering being indoors and fed with only 10 ft of coax, it does very well.

Good evening John, nice to read that the glass is half full in your court. Great way to look at things. Once more tests are done a better plan can be implemented. The hard part is the waiting. Oh just wanted to say great work on contacting the Hawaii station. Funny thing I contacted them in the contest today and they were crystal clear!
Mike

Congrats on finally working Hawaii! I can imagine there was some fist pumping going on in the N8ZYA shack afterwards. Probably would have been some "happy dancing" too, if it weren't for the back pain.

Got you covered with some prayers so that you'll find some relief. Miracles can and do happen, and I'm praying that you get one.

I was ecstatic about the Hawaiian station. All I need is Alaska now. Thanks for the thoughts and prayers too.

I felt the same way about the Hawaiian station. Not only could I hear him; I could hear him VERY well.
If there were only a few like him in Alaska ?