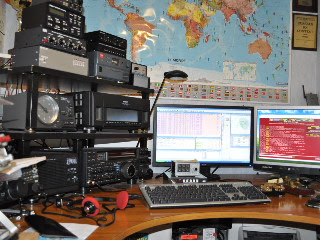 This morning, I truly thought  was going to be "the end" of my string of daily DX contacts. Propagation isn't good (SFI 103) and despite hearing two "new special event stations" from Austria, I was hearing only very weak signals. In desperation I scanned the other bands but only found a brief opening on 15 meters, where I heard F5IN; but couldn't work him.

I was so frustrated that I shut off the rig and went downstairs for another cup of coffee. After looking through the morning newspaper, and being comforted by my wife, I drudged back upstairs to listen a bit more. Unfortunately, there was nothing but silence on the DX portions of all the bands.

I thought this was "the end" of my daily DX contacts.

Not one to wallow in misery for very long, I decided to see if anything was happening at the local level, and immediately found N2CVE on the 30 meter band. We had a very nice QSO about TenTec rigs and his random wire antenna. (his is outdoors). Jim has been away from the hobby for awhile but is actively perusing CW with a renewed passion. It was a long pleasant conversation about several other things too.

The temperature is only 21 degrees this morning, and it's pouring down fresh snow. Despite this, I felt refreshed after chatting with a good CW operator, and always find it good therapy, for a bruised soul.

The third cup of coffee went down around 11:30 am which meant I had been glued to the headphones for almost two hours. One last time, I spun the dial over to the 17 meter band for a last attempt before admitting defeat.

I heard a loud signal on 18.077 and assumed it was local station. I pitched my call back; just to let them know someone was there, and he returned to me. It was slow CW but I missed it at first, or couldn't believe it wasn't  local, since I had my mind in another gear. It was then that I realized it wasn't, and recognized it as French.

Never in my life have I experienced the joy of working an old friend whom I worked many many times before! This station turned out to be Bert (F6HKA) near Limoges France. He had been sending the K3Y/ EU call and it went right over my head. I asked him to repeat the call since I was in such a state of both confusion and ecstasy. He did so; and I almost fell out of the chair.

This QSO turned out to be much more than the standard exchange. I apologized for not hearing the call correctly, and told him that I thought he was a local station. He asked if I was still QRP. I said yes, he said follow me, and I'll drop down to 5 watts. Bert moved slightly up the dial to avoid some noise, and dropped down to QRP at 5 watts. We completed the exchange as a VERY nice 2 X 2 QRP QSO. 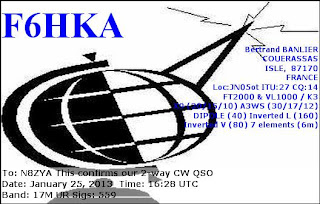 Today was a very welcome contact, despite working almost two hours for it, and I'm thinking it's getting more difficult each day to continue make a daily DX contact. But for now, today marks my 27th consecutive DX contact with my simple QRP station.

Bert, F6HKA is an amazing operator. I've worked him on 15 and 40 meters this month. Big signal on both bands. I read today that he has over 1000 contacts as KY3/EU so he's burning a lot of oil to keep it flowing!

Hello John, I enjoyed your fine story. Great to see you can make a 2 way QRP QSO on the indoor antenna. FB
GL in DX, 73, Bert

Nice post John! I've worked Bert quite a few times during the SKCC sprints. Yes you guys are right he is top notch.

WX here this morning was 14 F and a couple inches of snow throughout the day. Now I have to take it real easy on the way home on my bicycle.

Yes, Bert is real sharp,and a real gentleman. He always makes a special point to say "hello" when he works my QRP station. This morning was # 8 for me. I've worked him twice this month as the K3Y/EU op. I've worked him on 17-20-and 15.

BTW/ You have an especially fine catch on 40 meters!

It was especially nice to work ANY station this morning. hihi

I've worked other DX QRP stations but they're far and few between. Mostly they're running a beam with lot's of "gain"; BUT I got a card recently from a QRP op in the Canary Islands who was using a long wire from a hotel balcony and I've worked a "slow freighter" near the coast of Venezuela.

On the 2x2 QRP "local" contacts; my log book now has 379. I don't do a lot of contesting because no filters in the rig.

I admire your determination with the bike today. I've never attempted to ride on snow, but can imagine it's quite feasible with good knobby tires, especially with a little less air in them. We've also had a couple of inches of the white stuff today. I've swept the porch, the sidewalk, and the car. Now there's a fine icy mist coming out of the sky which I imagine will turn into "black ice".

How far do you ride to work? Be extra careful this evening. I know you'll be fine but some people haven't a clue how to drive their cars in this stuff. hihi

Do I sense a K3WWP style streak in the making?

John Shannon (K3WWP) is "the man" with QRP and has always been an inspiration to me. The NAQCC Club is at the top of my list.

John, Bert does have a great signal into NA! I've worked him several times myself and it just amazes me how he can defy poor propagation. Congrats on the 2x2 QRP QSO! I'm hoping to be on a bit myself this weekend QRP. My 703 has been sitting silent now for over a week!

Just had the opportunity to connect on the internet. Congrats on all your recent DX achievements. 73 Dick

Bert sounds just like a "local" here in the valley! I'm assuming you're hanging around the 20 meter band? I'm always listening for Alaska.

Glad to hear you checking in with me. I worked a local station in Florida this morning on the 18.096 frequency. It was the first time I've had anyone answer my CQ on this QRP calling frequency.

Hope you and yours are doing well in France. Our friends Paranoia and Schizophrenia are still running rampant here; but on the positive side---Construction is "up". We're building asylums quicker than we can plant corn.